INFP Love: What Love Means to the INFP Personality Type

INFP Love: What Love Means to the INFP Personality Type 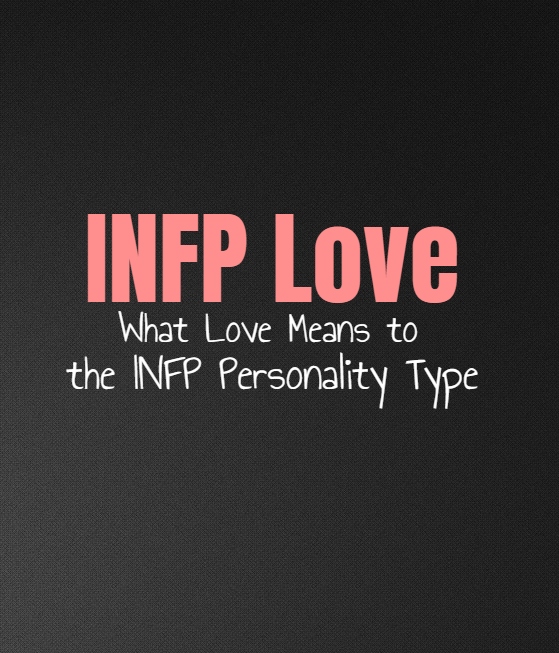 For everyone falling in love and being in love are different experiences, for some it is one of the most important things in life. For others this might be something they are hesitant to experience, and might even shy away from it. Most INFPs are certainly drawn to the idea of being in love, wanting to experience a sense of passion and true romance which happens in movies and novels. For the INFP the more important benchmarks in life should be celebrated and experience with a sense of enthusiasm and intensity. For them, love is one of these things which should not just be swept under the rug.

They Fall Hard and Fast

INFPs often get an initial feeling about someone, something in their gut which draws them closer. When they meet someone they often know right away whether or not they can truly fall in love with them. Because of this they don’t like wasting their time when they don’t really feel that spark or connection. INFPs do fall in love fast, since they can feel when someone is special and when they are going to be capable of truly bonding with them on a deeper and more real level. They also fall rather hard when they do, this person they love becomes a part of them.

INFPs give everything when it comes to falling in love, and don’t like doing this halfway. They want to feel truly inspired by these emotions, and believe in really diving in. INFPs don’t want to hold back when they do let themselves fall for someone, instead they want to be surrounded by these feelings. They want to allow themselves to become so wrapped up in that they are living and breathing these emotions. INFPs want to experience things in a passionate manner, and don’t like feeling as if they have to hold themselves back from what can spark their soul.

They Make Love a Priority

INFPs do make love a priority when it finds them, and they don’t want to allow other things to come in the way. They also want the person they are in love with to feel the same way about them and their relationship. For the INFP having this type of bond and connection is something they should value and take seriously. They don’t want to allow anything else to seem more important, since love for them really is a priority. This doesn’t mean INFPs are incapable of having other things they are passionate about, they just don’t want something else to come in between them and this special connection. INFPs believe ni holding onto these values, and so for them love should always be a priority in their lives.

INFPs do care about a sense of independence and of having things which are their own once they really become comfortable with their relationship. But that doesn’t mean they don’t lose sight of making sure their partner is important to them. INFPs value the things which can leave them feeling inspired, and for them love is one of those things in life.

They Don’t Want to Lose Their Enthusiasm

INFPs really don’t want to lose their sometimes childlike enthusiasm when it comes to love and dreams. They are natural dreamers and often hopeless romantics, who just want to be capable of going after the things they really want. INFPs don’t want to settle for less than their dreams, and really want to reach for these things which inspire their souls. They need to remain connected to this part of themselves and never let go of the dreamer inside. This is part of who they are, and so when it comes to love they don’t want to become jaded or cynical. While some people around them might tease the INFP for their dreamer qualities, it isn’t something they can really compromise on. They believe in being true to themselves and want to uphold their sense of morals and sincerity.

They Love Deeply, So They Hurt Deeply

While INFPs love deeply and truly do immerse themselves in these feelings, this means they can also get hurt. When they fall in love it means so much to them, and sometimes it leaves them blind to the flaws in someone’s character. When this happens the INFP might only see the good in them, seeing the potential and what they can become. This belief in someone else can lead the INFP to getting their heart broken when they do fall in love completely. This doesn’t necessarily stop the INFP from taking chances again in the future, but it can set them back for a while. They often put themselves out there and wear their heart on their sleeves, which really does leave them exposed to getting hurt. While this means getting hurt, it really isn’t something INFPs can or even should change about themselves. Their openness and honesty is part of what makes them such giving people who are so capable of making a difference in the world around them. While it might be challenging for them when they get hurt, is also is what makes them love with such a deep and meaningful purpose.

For the INFP falling in love and being in love are often a big part of who they are. They have big hearts and are capable of truly loving with a sense of openness and depth. They don’t want to hold back when it comes to follow their dreams and believing that love is truly out there for them. While there might be times where the INFP feels a bit wounded, they often find a way to recover and open themselves up to the opportunities around them. Love means a lot to the INFP, even though it can be difficult at times to continue pushing past the heartache and experiences of the past.

Do you need art – the one you see in museums and galleries; movies, books, music, and songs – like bread to eat and water to drink? You know what to do: